Political Badges Through the Ages

As another election gets closer, so too do the physical signs of support people display for a certain party or individual. This might be a rosette, a sign in the front garden or stickers in the window.

Another way people show their support is by wearing political badges. This has particularly been the case in the United States, where brightly coloured badges with party slogans or witty statements of support have been mass-produced for decades, and are now a part of election culture.

American political badges have a rich history, which continues to this day – just take a look below: 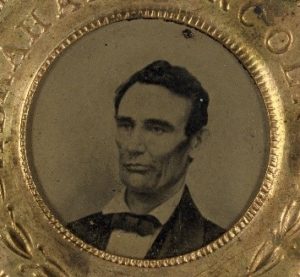 A ferrotype, also known as a tintype, is a way of creating photographs by using tin and dark enamel. This was the technology used to create this political badge in 1860, which was in support of American Presidential candidate Abraham Lincoln. 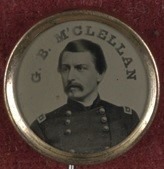 Early political badges simply showed an image of the candidate and their name, such as this badge from 1864. They’re a lot more colourful these days!

In the United states, the 1896 Presidential Election saw the start of the mass production of pin badges (known as buttons in the US).

New and inexpensive technology pioneered and patented by a company called Whitehead & Hoag meant that campaigns could now afford to create a large number of political badges.

These badges had a metal back and a straight pin, and had a celluloid cover to protect the front image. Not too dissimilar from the badges you see today! 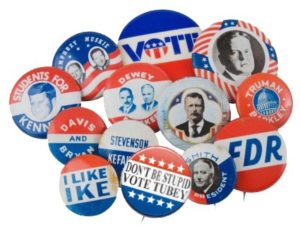 These continued to contain images of favourite candidates, straightforward statements of support, as well as more creative slogans. 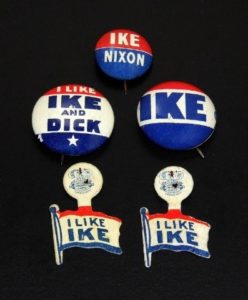 The slogan ‘I Like Ike’ appeared in the 1950s, in support of Republican President Eisenhower, and was particularly popular on badges.

It was found that people wanted to show support for the individual, rather than a certain political party or programme. 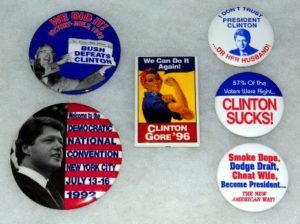 Moving through the years, grassroots movements took more of a role in creating electioneering material.

Slogans continued to play a big role on political badges, as these examples from the Bill Clinton era show! 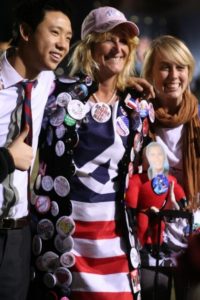 This Obama supporter covered in badges is a great example of how this tradition has continued well into the 21st century in the United States. 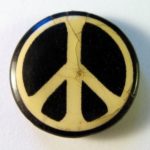 It’s not just in elections that we see political badges, though. They can be used to show support – or opposition – to any number of causes, such as the Campaign for Nuclear Disarmament, now internationally recognised as the peace sign.

For hundreds of years, badges have been a great way of backing a cause. When it comes to politics, badges have allowed grassroots movements to express this support and help mobilise people.

With an upcoming election, our badge making kitsk give you all you need to do the very same and make badges in support of your party.

Have we missed any iconic political badges? Let us know!