Why is it high time to launch a protest badge workshop 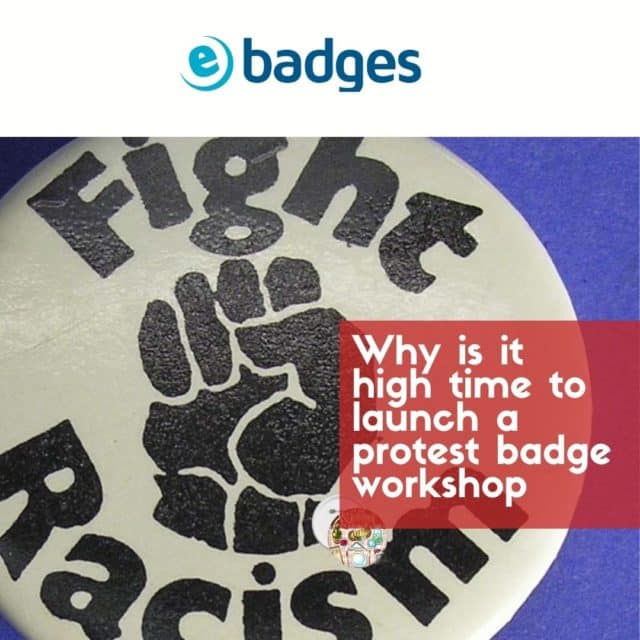 The primary purpose of button badges is to advertise a group’s demands, desires, and beliefs. However, they can also support identity formation during times of heated political debate. In recent history, protest badges have been used as a way to show support for a cause or political party.

Badges have a longer history than you might think at first. European holy shrines produced thousands of pewter badges for pilgrims as early as the 12th century. In a situation similar to the contemporary gift shop, people would purchase the badges at shops surrounding the shrines. People believed in the talismanic properties of badges, and it was also a means of conveying one’s status as a devout.

This aspect of badges as creators of identity is still present in the way they are employed today. Button badges have always been a way of expression, being accessible, cheap and easily to make. In the 20th century, buttons have come to define mass movements

Most pre-1950 badges were created for trade unions, clubs… They typically indicated membership and various campaigns. The range of topics is vast, including badges for nurses, hospital employees, transport workers, bricklayers, plumbers, firefighters, and many more.

In the second half of the 20th century, button badges became a way to reflect the large-scale protest movements that took place. These movements were around freedom, nuclear power and the environment, the war in Vietnam and Indigenous land rights.

Button badges made post-1950 tended to represent campaigns instead of groups, and the language employed shifted towards a much more radical tone.

Throughout history in the UK, underrepresented voices have been able to make themselves heard with protest badges. This includes the suffragette movement and the Greenham Common protest. In recent years, there has been an increased focus on protest, especially in light of movements such as Black Lives Matter and Women’s safety.

How to design protest badges?

There is no one definitive answer to this question. Some factors to consider when designing protest badges would include the purpose or message of the protest, the target audience, and the overall aesthetic of the badge. Additionally, it is important to ensure that the badge is eye-catching and easily readable, as it will likely be seen from a distance by people who are interested in the protest.

Badges worn in protest can take on many forms and be designed in different ways to get their message across. Sometimes button badges don’t have any words on them at all. They rely on symbols to show the cause they represent.

You can create protest badges with a badge machine: depending on the quantity of badges you are willing to produce, you can choose between different badge makers.

Setting protest badge workshops is a great way for kids to learn more about their rights, and also to gain skills in peaceful protesting! They will connect with like-minded people and build community, as well as have fun and be creative. Launching a protest badge workshop will inspire others to take action for social change.

It is also a great way to build solidarity and support for those who are facing oppression and injustice. In addition, you will be able to raise funds by selling the output of your production. You can check our fundraising pack.