Worm charming is a unique and bizarrely British tradition that’s always a hit at fetes. There’s in fact an annual International Festival of Worm Charming in Devon, which over 600 people attend!

Put simply, the ‘worm charmers’ taking part are tasked with charming up as many worms to the surface in a set time – usually around 30 minutes. The record is over 500 worms!

Worms are sensitive to sound vibrations and tend to head to the surface when vibration’s detected, so worm charmers use all sorts of weird and wonderful methods to charm them up. Favourites include simply tapping the ground with your feet or playing music near the ground, to more intricate methods involving sticking a gardening fork in the ground and banging the top to vibrate the soil. 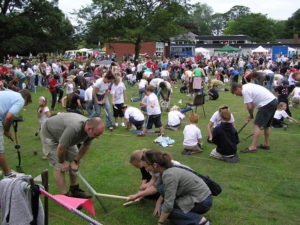 Different worm charming societies (yes, there are such things!) have different rules regarding whether liquid can be used to bring up the worms, but using a watering can on the ground is also a popular charming method. The rules are clear on one thing though – no digging is allowed!

Fancy dress is common among worm charmers, giving great opportunity for a really zany event. To top it off, a worm-themed trophy leaves you more room to flex that creative muscle.

By charging a small entry fee, you’ll be sure to get a good return from this fun and alternative fete stall! 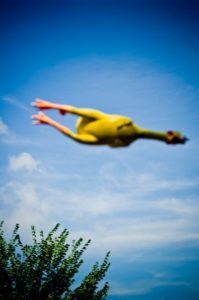 Welly wanging is seen at fetes across the country, and even has an annual Welly Wanging World Championships. The Guinness Book of World Records has the furthest welly throw as 63.98 metres, which is pretty impressive!

For a unique twist on this traditional summer sport that’s sure to catch peoples’ attention, turn welly wanging into chicken chucking. Chuck a rubber chicken, and base the competition either on how far people can throw it, or set out a bin or basket they have to throw the rubber chicken into!

This is a smashing take on the good old-fashioned coconut shy – who wouldn’t enjoy breaking a plate or two!

Kids and adults alike will love to have a go on this unique fete stall. To set up, ask for donations of old crockery before the fete, or ask at charity shops for anything they have that won’t be saleable.

For the stand itself, an old bookshelf or wardrobe is good to set up the crockery, or you could even stand it all up on straw bales. Obviously, safety considerations will have to be taken into account, so stand far enough away that there’s no chance of rebounds or broken crockery coming close. Often, the stands are set up with a tarpaulin behind and on the floor, so it’s easy to pick all the remains up at the end of the day.

Setting up a stand with a badge making machine will give you all you need for your visitors to make great personalised keepsakes from their day at the fete.

You can charge people a small fee to make their own crafty curiosities – a great idea would be to let children draw their own artwork before turning it into a keyring, badge or magnet.

Not only are they left with a great little gift, but the process itself is good fun. Our fetes and fundraising pack gives you everything you’d need for a successful stall – it’s not the type of thing you see at the usual fete, and will help make yours one to remember!

The human fruit machine is a really simple stall to set up, and is a great one to get the kids involved in helping out with, too.

It requires two or three people to randomly pull fruit from a box and display it at a signal – if the line of fruit matches, then the player gets a small prize.

This can be done on a larger scale, like in the image below, or it can be as simple as using smaller cardboard boxes with holes cut through which are just large enough to display the fruit.

These were just a few of our favourite ideas for fete stalls that are a little bit different to the traditional games and activities – we’d love to hear if you have any more!