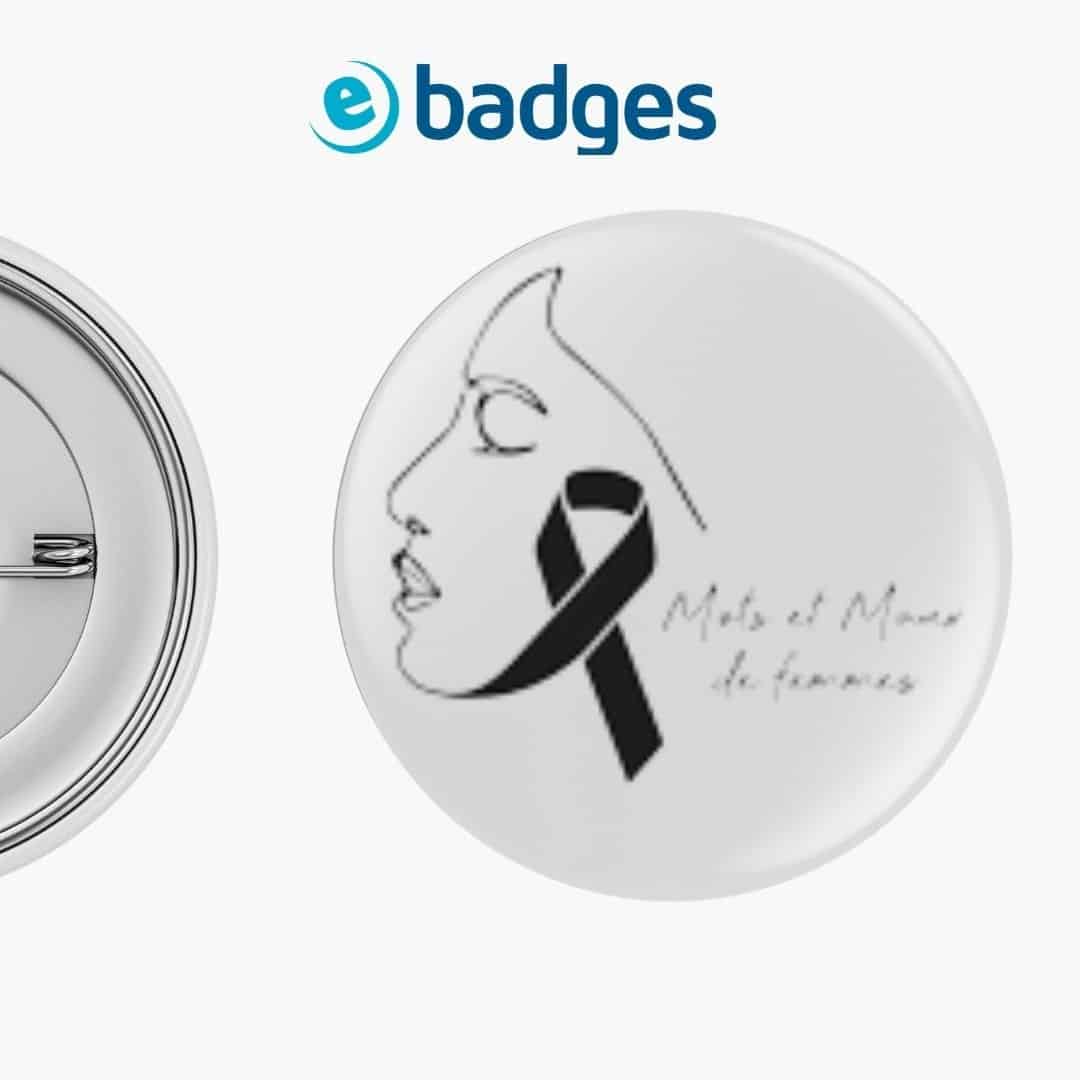 This project will take shape with an exhibition in November 2021 featuring photographs and texts written by both celebrities and victims of violence. “Mots et maux de femmes ” means in French “words and women aches”.

“Mots et maux de femmes “, a non-profit that supports victims of violence, approached several female personalities to write about their views on violence. The aim of this project is an exhibition presenting photographs and texts written by both celebrities and victims, without the texts necessarily corroborating, emphasising or translating the image and vice versa.

At Ebadges, we have teamed up with “Mots et maux de femmes “, to produce 1000 button badges that will be used in the different places where the exhibition will take place. The badges will be used as a mean of communication to denounce violence made against women. “Mots et maux de femmes” wanted to reach as many people as possible with button badges. Today, nearly 300 people have supported the project.
” Mots et ” maux de femmes ” knows some of the collective’s approaches may be unsettling while presenting the exhibition, but they’re not afraid to disturb because violence against women must finally be shocking enough for awareness, action and protection. In order to denounce the mistreatment suffered by women in a different way, the organizers gave photographers carte blanche to bring their personal vision to the project. While not seeking to shock or scandalize, the project seeks to raise awareness Their goal is not only to denounce the issue of sexual abuse, but to use photography as an artistic medium of expression to reach new audiences.

The European Union Agency for Fundamental Rights published in 2014 what remains to this day the most comprehensive EU-wide survey on violence against women. 42,000 women in the 28 Member States were asked about physical and sexual violence, harassment and stalking experienced in the year before the survey and after the age of 15. The results painted a bleak picture of the nature and extent of violence against women in the EU. The survey data showed that one in three women had experienced physical and/or sexual violence after the age of 15. One in ten women has been sexually abused after the age of 15 and one in twenty women had been raped. Just over one in five women had been physically or sexually abused by a former or current partner, while 43% of women had experienced psychological abuse or controlling behaviour in a relationship.

By supporting Mot et maux de femmes and raising awareness of these facts, we hope that this number decreases and violence against women is stopped. We feel this is very worthwhile cause to lend our support to and hope that everyone can help where they can. Badges have always been used to raise awareness, to protest and to campaign for important causes.